Beatification of the Martyrs of Casamari

On Saturday, April 17, 2021, the ceremony of Beatification of the six monks Simeon Cardon and companions, who suffered martyrdom between May 13 and 16, 1799, was held in Casamari. 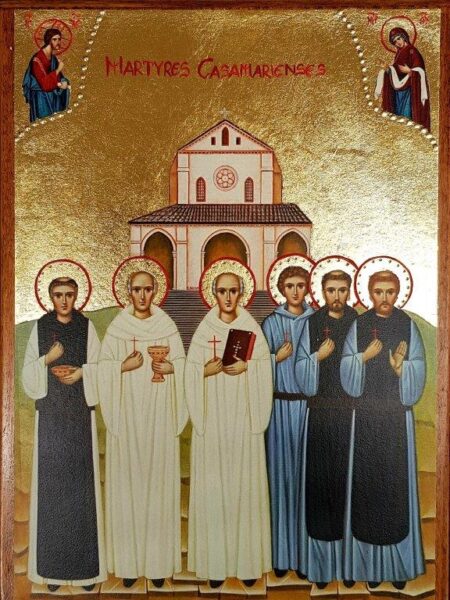 Beatification of Simeon Cardon and five companion martyrs, Cistercian monks of the Abbey of Casamari Order of Cistercians

Between 13th and 16th May 1799 six monks were killed in the Abbey of Casamari, at that time a part of the Cistercian Order Strict Observance, in a raid by about fifteen French Jacobin soldiers fleeing from the Kingdom of Naples after the fall of the Parthenopean Republic.

The fame of holiness of Father Simeon Cardon of Cambrai, a Benedictine and then a Cistercian, and claustral Prior, of Father Domenico Maria Zavřrel, Czech, first a Dominican and then Cistercian of Casamari, of the French Oblate Brother Maturino Pitri, of Brother Albertino Maisonade, of French origin from Bordeaux, of Brother Modesto Burgen from the abbey of Sept-Fons in France and of the Italian Lay Brother from Milan, Brother Zosimo Brambat, was immediately recognised.  Together with a few other brethren, the six had remained in the monastery. The abbot and other brethren had taken refuge elsewhere, like so many monks from the monasteries in the area, during the raging violence caused by the passage of some straggling troops of the French army fleeing from the Bourbon kingdom to northern Italy.  The facts as they are known are that at Compline time the fleeing soldiers were welcomed into the monastery and fed, but they were also looking for money and valuables. Faced with their violence in desecrating the church furnishings and the ciborium containing the Eucharistic species, the monks tried to recover and put the consecrated particles in safekeeping, but were barbarously attacked and killed. This was not an action linked to a systematic and explicit persecution of the faith, but the violence of the attack manifested a hatred of the faith and its symbols that can certainly be traced to Jacobin ideology.

As soon as possible, the six were buried by some of the Brothers in the monastery cemetery. Many graces were granted through their intercession until, in 1854, the abbot of the time, in order to preserve the peace of the monastery, ordered them, in the name of obedience, to stop granting graces. A few years later this prohibition was lifted, the graces multiplied and the mortal remains were placed in the abbey church. The fame of martyrdom grew and spread. It was only in 2013 that the canonical process for beatification began. On 26 May 2020 Pope Francis authorised the promulgation of the decree of martyrdom, and on 17 April 2021 the Beatification was celebrated in the Basilica-Abbey Church of Casamari by the Prefect of the Congregation for the Causes of Saints, Cardinal Marcello Semeraro, representing Pope Francis.

The complex make-up of this company of martyrs, one Czech, one Italian, four French, and their original vocations, Benedictine, Cistercian, Dominican, united in a communion of offering, found a mirror image in the beautiful liturgical assembly of the 17th April 2021.

The bishops of the area were present: Bishop Ambrogio Spreafico of Frosinone-Veroli-Ferentino; Bishop Gerardo Antonazzo of Sora-Cassino-Aquino-Pontecorvo; and Bishop Lorenzo Loppa of Anagni-Alatri. A delegate from the Diocese of Milan, Mgr Carlo Azzimonti was also present.

Also present were the civil authorities, some prefects and mayors of the area, the ambassadors to the Holy See of the Czech Republic His Excellency Václav Kolaja and of the French Republic, Her Excellency Elisabeth Beton Delègue, and the commander of the Swiss Guards.

I will certainly forget someone, but it was pleasant to see the Abbot of Monte Cassino, Dom Donato Ogliari, the Abbot General of the Cistercians, Dom Mauro Lepori, and our own Dom Eamon together; Dom Stefano di Chiaravalle and Dom Loris di Frattocchie, a good friend of Cardinal Semeraro, and many other white mitres in red chasubles.

The tapestry of the martyrs bears the beautiful image of the icon written by the Benedictines of Isola San Giulio.

The procession of the relics saw a host of monks and lay people, Cistercians and Trappists. The procession was led by Father Pierdomenico Volpi, the Postulator General of the Cistercians and a monk of Casamari, and lead by Mother M Francesca of Valserena with Sr Adriana of Vitorchiano. The presentation of the reliquaries and the accompanying lamps was made by our sisters of Valserena, Sr M. Grazia and Sr Renza, Brother Javier of San Isidro, cellarer in Rome, Brother Michele of Frattocchie and other Cistercian and Dominican monks from the Czech Republic and some lay people associated with the community.  The first reading of the Mass was given by the Postulator of the Trappists, Sister Gabriella of Vitorchiano.

A gesture of cordial friendship and generosity was the gift to each community present of a beautiful reliquary with the relics of the 6 new martyrs and an icon of the martyrs.

The hymns were chosen from the richness of the Gregorian tradition for the Hymn “Sanctorum meritis” and the Kyriale. We then experienced the magnificence of the Gloria in the Ambrosian mode, together with the original composition of a hymn specifically for the martyrs of Casamari by Maestro Giacomo Cellucci, enriched by the sound of the trumpet as the tapestry of the new Beati was unveiled. In communion we were joined in singing a hymn to the Martyrs of Casamari by Frisina.

The beauty of the Abbey and the Church of Casamari were enriched by the light of these new Blessed Martyrs who have gathered a community of faith from the various Benedictine-Cistercian monasteries.

After the final thanks of Bishop Spreafico and Abbot Loreto Camilli, Abbot General Mauro Lepori recalled, among other things, the words of Dom Angelo Savastano at the O.C. General Chapter of 1933 inviting the Order to begin the canonical process for the martyrs because “the question concerns not only a monastery, but the whole Order of both observances”.

We have had confirmation of this on this luminous 17th April 2021.

The celebration of the Martyrs gave an insight and practical expression to the reality of the pandemic that afflicts everyone and everywhere. The attention and the availability of spaces, the beautiful organisation, the faith in the benevolence that the Lord shows us, gave strength to face this difficult time with renewed courage and a satisfaction for the joy of being together.